Despite strict movement controls as part of the ‘circuit breaker’ measures from April 7, developers managed to sell 277 new private homes (excluding Executive Condominiums) during the month of April, based on the latest statistics from URA.

“Buyers and Investors were fortunate to have access to show flats in the first seven days of April. Thereafter, all show flats in Singapore were closed for the remaining 3 weeks. And with the extended circuit breaker measures, they will remain closed till the end of May,” says Ismail Gafoor, CEO of PropNex Realty.

Including EC sales, the number of new homes sold in April stands at 293 unit, of which 192 (65.5%) were transacted before the ‘circuit breaker’ measures kicked in. The non-EC sales figure is still a steep fall of 58% m-o-m compared to the 660 units moved in March. On a yearly basis, the sales numbers are also down 62.4%. The previous low was in December 2014 when 230 new homes were sold.

The lowest sales volume ever recorded, based on URA Realis, was in January 2009 when 108 units were sold. This coincided with the Global Financial Crisis (GFC) which also saw the monthly sales volume average about 200 units during the crisis period.

“Private new home sales for April was commendable amidst the unprecedented closure of all show flats and with only one major new launch, Kopar at Newton,” says Gafoor.

Luxury development Kopar at Newton is also the best-selling new project for April when it sold 83 units, it was followed by Treasure at Tampines which sold 28 units, and then Riverfront Residences which sold 17 units.

Last month, 102 new private residential units sold were in the Core Central Region (CCR). The highest priced unit was the sale of a 5,134 sq ft unit at the luxury development 15 Holland which fetched $13.8 million ($2,692 psf) on April 2.

According to caveats, other up-market developments continued to sell units during the month. They include Boulevard 88, Midtown Bay, Van Holland, and Neu at Novena.

“Given the movement restrictions and uncertain economic outlook, it is quite remarkable that some super luxury and luxury new homes were sold during the circuit breaker period. This may indicate that despite the pandemic, many wealthy and ultra-rich continue to view Singapore as an attractive investment destination and a safe haven to park their funds,” says Christine Sun, head of research and consultancy at OrangeTee & Tie. 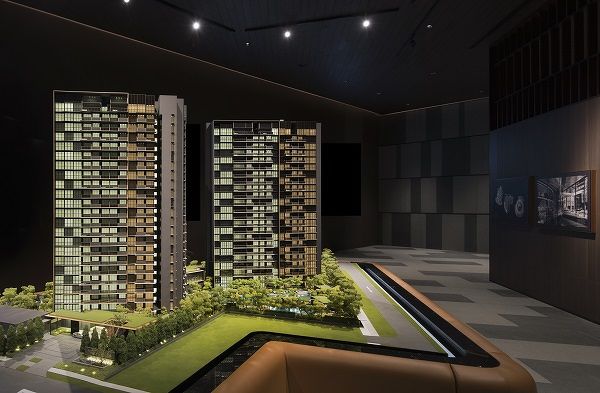 Looking ahead, new home sales will be muted in May, given that the ‘circuit breaker’ measures are set to end after June 1, says Christine Li, head of research at Cushman & Wakefield.

“We believe that developers would be cautious in launching projects during the CB period if at all. So new launches would have to be pushed to June and beyond. When the ‘circuit breaker’ ends in early June, showroom viewing should be ramped up in full force and sales activities would pick up as a result,” says Li.

She adds that, traditionally, June was not an ideal time to launch a new project as it coincided with the school holiday. But this year, schools are set to resume in June and families will not be traveling overseas.

Gafoor echoes her sentiments adding that he is “optimistic that projects that are rightly priced will continue to perform well, in the tune of 200 units for the month of May.” Upcoming new projects include Penrose in Sims Drive by City Developments and Hong Leong, and The Landmark by MCC Land, SSLE Development, and ZACD Group.

Meanwhile, Sun of OrangeTee & Tie expects prices of new homes could fall by 3-5% for the full year, while around 6,500-7,500 new homes could be sold. She adds that it is still unclear how the property market will recover in the subsequent months.

According to Li, leverage in the private residential market has also come down due to loan curbs such as tighter Loan-to-Value (LTV) ratios and Total Debt Servicing Ratio (TDSR). Local demand has also driven the property market in recent years, with local purchases making up 78% of non-landed property sales in 2019, up from 63% in 2007, she says.