OLA executive condo’s (EC) sales over the weekend of March 21 and 22 may be a bellwether for other projects in the new world order under the spectre of the pandemic.

Sales at the Spanish-themed EC, located at Anchorvale Crescent, amounted to 167 units, which translates to a take-up rate of 30% of a total of 548 units in the development by Anchorvale Pte Ltd, a joint venture between Singapore-based Evia Real Estate and Malaysia-based Gamuda Land.

Of the units sold, first-time buyers made up about 61% (102 units), with second-time buyers or HDB upgraders making up the remaining 39% (65 units).

Average price achieved over the weekend was $1,135 psf. The majority of the units sold were the three-bedroom and three-bedroom-plus-study premium units, with 135 out of 422 units (32%) taken up. Four-bedroom units registered sales of 26 out of 87 units (30%); while three out of 30 two-bedders were snapped up. Of the nine 5-bedroom penthouses in the development, three were sold at above $2 million each.

Having opened its sales gallery for preview a month ago, online application for OLA began on March 19 and 20, with bookings taking place over the weekend of March 21 and 22.

The preview of OLA on March 20 coincided with the Ministry of Health (MOH) announcement that gatherings with 250 or more participants are to be suspended until June 30. For events and gatherings with fewer than 250 participants, precautionary measures have to be taken to ensure separation of at least 1m between participants. The announcement came after news of the first two Covid-19 deaths in Singapore.

As a result, Anchorvale implemented additional health precautions, such as installation of advanced air filters as well as stringent cleaning schedules to disinfect and sanitise public spaces. 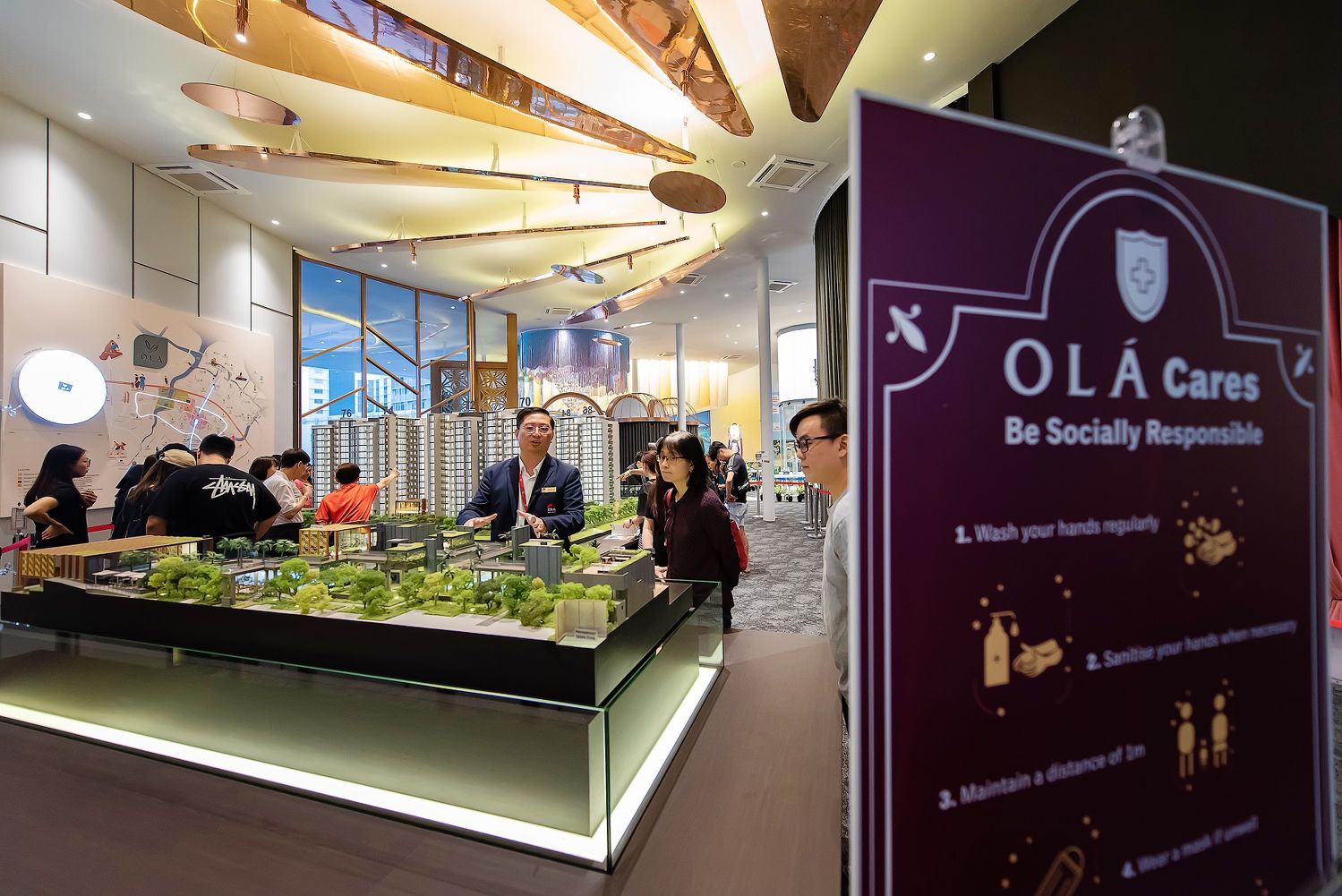 “The Covid-19 situation has increased economic and job uncertainty among Singaporeans, especially in the past few weeks,” says Vincent Ong, director of Evia Real Estate. “This is also reflected in the lower-than-expected turnout over the first weekend of sales and by the higher proportion of buyers opting for deferred payment.”

Ismail Gafoor, CEO of PropNex, one of the joint marketing agencies for OLA, concedes that sales fell short of initial expectations. “We were confident after the sales [achieved] at Parc Canberra where 64% of the units were sold, followed by The M where 70% of the units were sold on the first weekend,” he says. “We thought that OLA would have been able to achieve sales of at least 300 units.”

The weekend launch was muted as a result of the increase in the number of Covid-19 cases in Singapore over the past two weeks and new measures on social distancing and greater restrictions on public gatherings, adds Gafoor. However, against the backdrop of a falling stock market and more countries closing their borders — including Singapore, with effect from March 24 — to stem the spread of Covid-19, “I would say 30% sales on the launch weekend is credible”, he continues.

No doubt, the deteriorating global macroeconomic outlook has shaken the confidence of some homebuyers and upgraders who have taken a more cautious stance before committing to a home purchase, adds Gafoor.

According to Evia Real Estate’s Ong, “OLA is probably the only sizeable residential project to proceed with its sales launch after the impact of Covid-19 began to be felt across Singapore’s economy”. Ong adds that he remains “convinced that this project has set a new standard for ECs in Singapore, and has been priced at affordable rates”.