The Cairnhill enclave: Where prices have outperformed the general luxury segment

How does one describe Cairnhill? Is it an area that covers just roads or streets that begin with that name? Or is it larger than that, like an enclave? The dictionary defines the word “enclave” as an area that is different from the larger area or country surrounding it, and this seems to aptly describe Cairnhill.

Part of the reason for Cairnhill’s uniqueness stems from the fact that it is bounded by Scotts Road, Newton Road and Orchard Road. Embedded within the enclave are Mount Elizabeth Hospital and the Paragon Medical Centre. It has the world-renowned Newton Hawker Centre and the Anglo-Chinese Junior School located at its fringe. There are also five-star hotels and top-class shopping malls within the enclave or at its fringes. Transport-wise, Figure 1 shows that the Cairnhill enclave is triangular and at each of its vertices is an MRT station. For those driving, the Central Expressway exits out to Cairnhill Road. Because of its unique topology, Cairnhill is well-shielded from the noise and hustle and bustle of the major arterial roads that hems it in.

In fact, no other micro-market in Singapore’s luxury districts has that many unique selling points compared to Cairnhill. In this light, it would be interesting to see how prices have performed in the Cairnhill enclave since 2015.

On the new sales front, there have been no transactions recorded in URA’s Realis system after October 2017. So, let us look at resale transactions in the area — in fact, how resale prices perform over time has a more direct bearing on how one’s asset values behave. 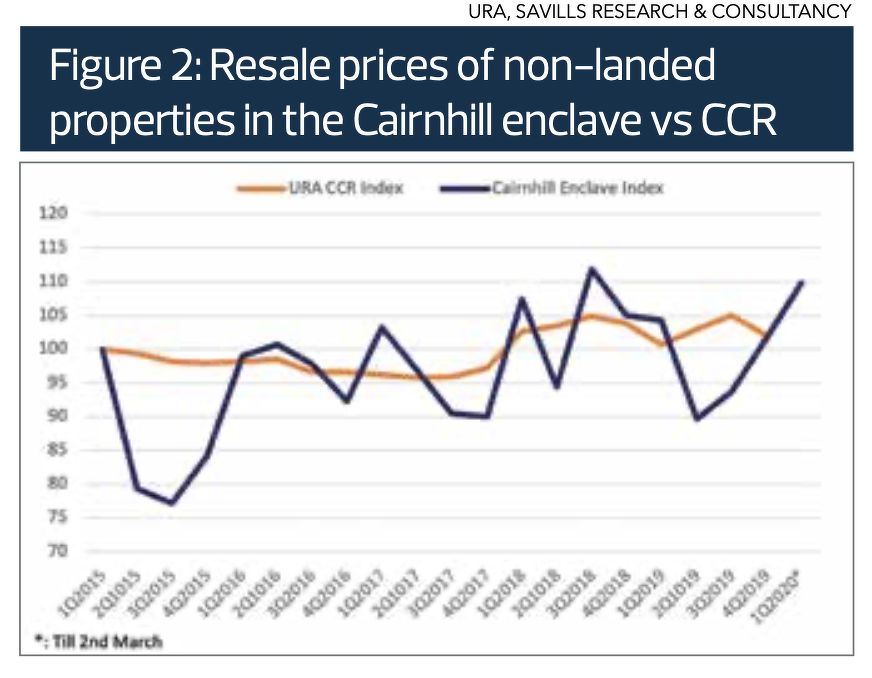 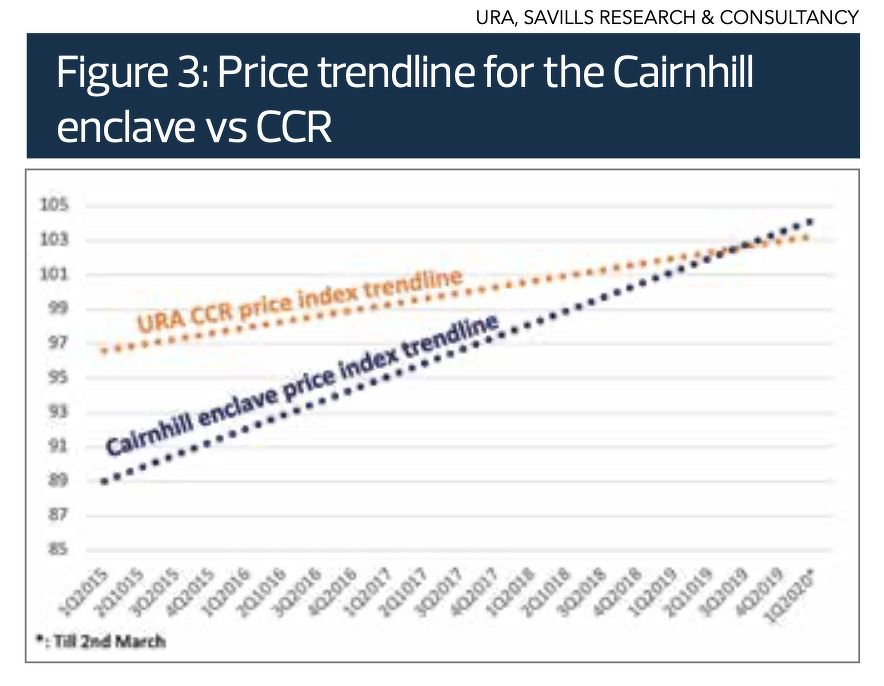 Some reasons can be offered for this price out-performance. One is the lack of new supply in the area. Other than the sale of two collective sales sites in the first half of 2018, the Cairnhill area has not been hogging the media limelight. But in today’s market, this may be a good thing because the dearth of new launch activity till 2020 just means the lack of supply in the area. The new supply in the pipeline is also low, which means interest and new launches there should be healthy (see Figure 5). 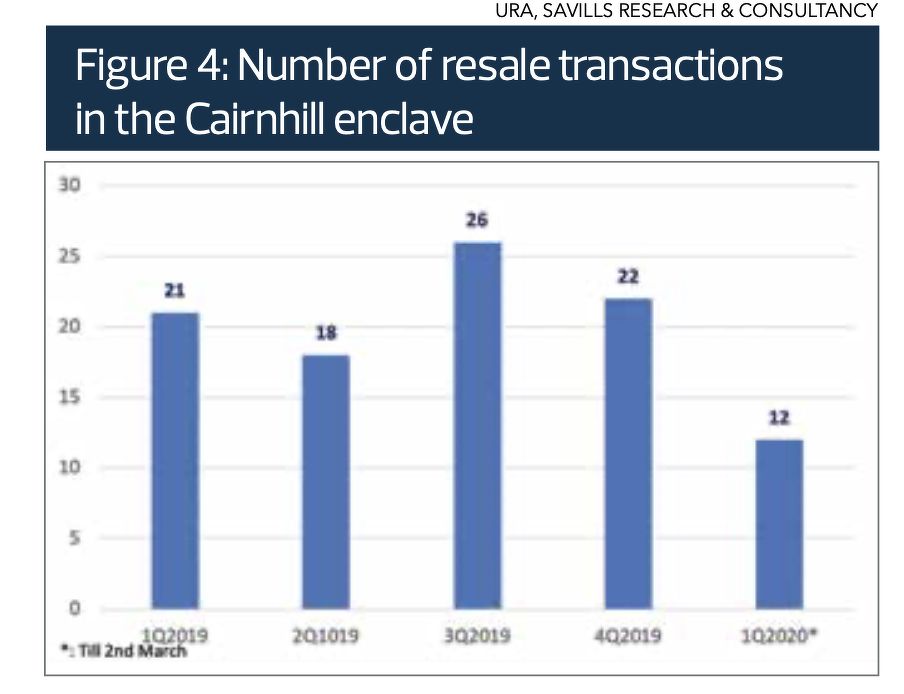 The other reason is that because supply is tight in the enclave, any new launch will tend to uplift resale prices in the surroundings during the period of sales (see Figure 6). 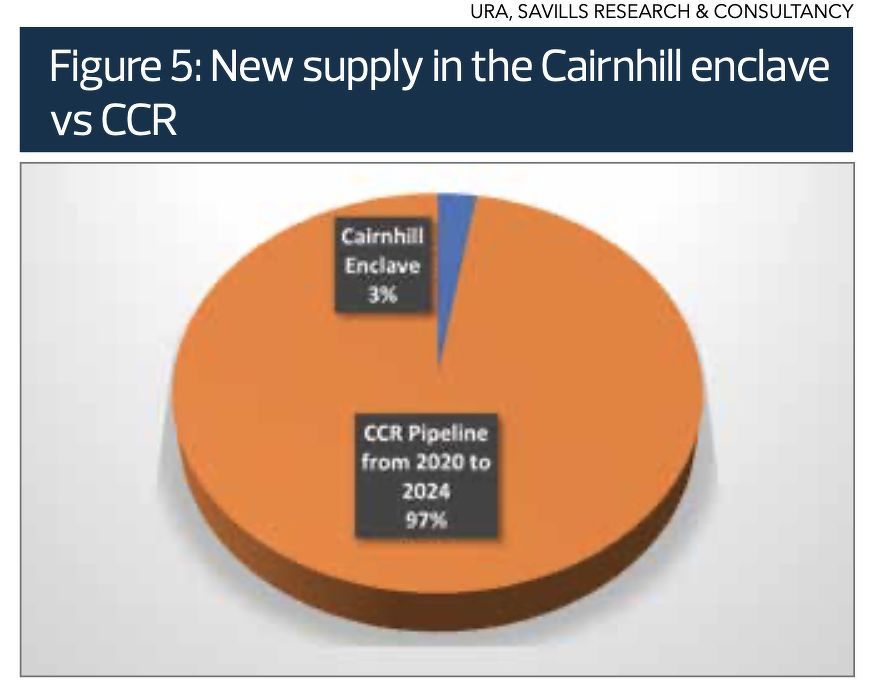 Although the collective sales market is now in a moribund state, given the limited supply of land in the Cairnhill enclave, any future sales of land for development would likely fetch even higher prices than what had been transacted till now. Therefore the possibility of any future new launches giving the area another push in prices is strong over time. 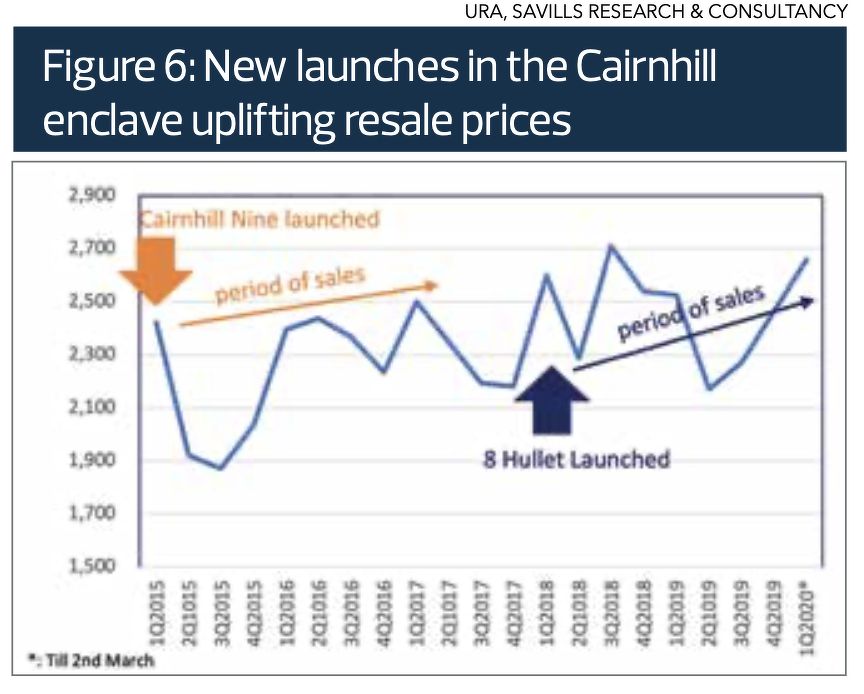 Much has been written about Singapore’s prime districts, but few have looked into the Cairnhill enclave. Those who are looking for a home should consider this promising area.